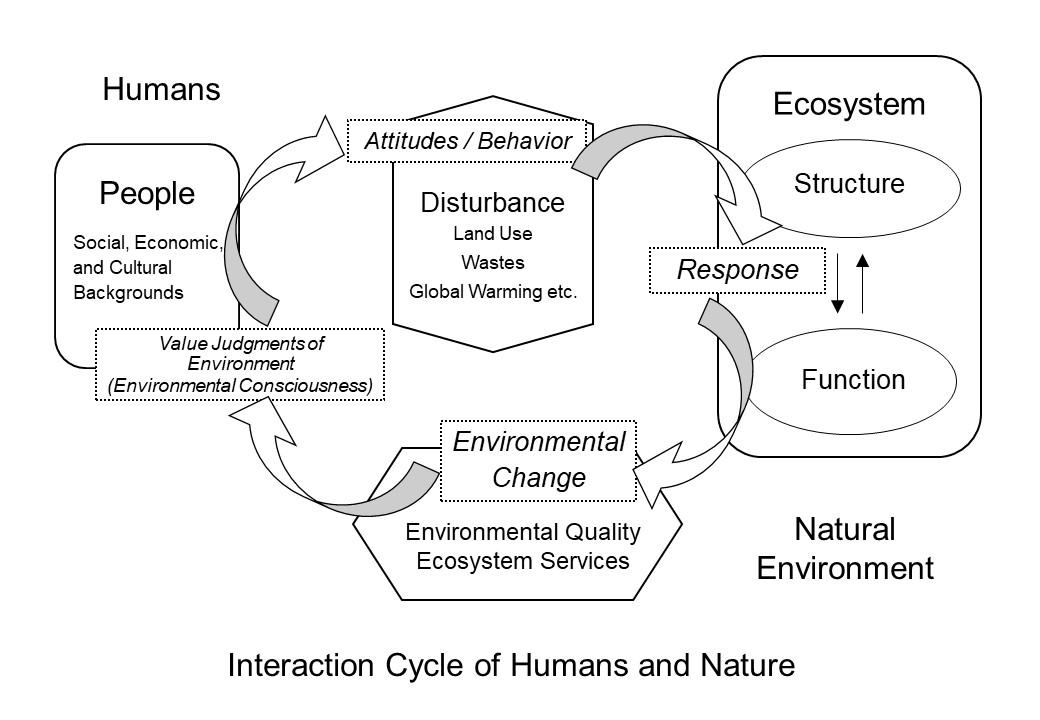 Interaction between humans and nature ＜I＞

The Field Science Education and Research Center (“FSERC”), Kyoto University, was founded in 2003. I started to work at the FSERC in 2007. It was the beginning of my encounter with the CoHHO, and I did not know very much about its concept nor background at that time. It’s been 12 years since then, but I have to say I haven’t even found out which way to go, not to mention the goal. It is just like I am chasing a “road mirage”. Therefore, I would like to take this opportunity of writing articles in this series to think over the CoHHO again.

Before my appointment at Kyoto University, I was affiliated with the Research Institute for Humanity and Nature (“RIHN”) established by the Ministry of Education, Culture, Sports, Science and Technology of Japan in 2001. Based on the premise (problem awareness) that environmental problems are rooted in “human culture” in the broadest sense, the RIHN aims to establish an academic field which elucidates “human-nature interactions” from both aspects of natural science and humanities and social sciences, and to contribute to solve global environmental problems. I left the Institute for Hydrospheric-Atmospheric Sciences, Nagoya University, where I had been working, and moved to Kyoto to work at the RIHN in April 2001. In 2004, a project called “Interactions between the Environmental Quality of a Watershed and the Environmental Consciousness” (Environmental Valuation Project) started and I conducted it as the project leader. In the same year, in response to an offer from Prof. Yamashita, I also became a part-time lecturer of the FSERC to give a lecture in a course on the CoHHO which the FSERC offered as one of the Liberal Arts and Sciences Courses of Kyoto University. As I was not only investigating watersheds encompassing a broad range from forests to lakes but also conducting surveys based on humanities and social sciences as well as natural science in the Environmental Valuation Project, I had no hesitation in giving the lecture.

I also wrote Chapter 7 “Forest and Water, Humans and Nature” in a book, “Mori-Sato-Umi Renkan-Gaku”, edited by the FSERC(*), which was used as a textbook in the course. Thanks to those opportunities, I believe, I was appointed as a faculty member of the Division of Forest Ecosystems at the FSERC in May, 2007.

(*) The book was supervised by Yoh Yamashita and published by Kyoto University Press in 2007.

A new organization is always expected to take on a new role. Otherwise, there would be no need to establish one. In the case of the FSERC, it was to develop the “CoHHO” in the framework of university’s education and research. According to the FSERC, “CoHHO is an integrated academic field to clarify the interactions among forest, river, human habitation (so called “Sato” in Japanese) and ocean ecosystems. Based on material and biological flows as well as human activities and cultures, CoHHO considers our relations with nature through the watershed.”

I readily accepted this concept because I thought it had much in common with the above-mentioned premise of the RIHN. Besides, I felt that the backgrounds of these two organizations were very similar. At the time of foundation, the researchers of the RIHN were gathered from Tohoku University, Nagoya University, Kyoto University, and Tottori University, most of whom specialized in the discipline of natural science. Meanwhile, the FSERC also consisted of faculty members from the University Forests, the Subtropical Plant Institute, and the Maizuru Fisheries Research Station affiliated with the Graduate School of Agriculture, and the Seto Marine Biological Laboratory affiliated with the Graduate School of Science, Kyoto University, all of which were mainly categorized in the disciplines of science and natural science. Furthermore, their concepts were both invented on the occasion of foundation of a new organization, and happened to have a strong awareness in common: In order to achieve the goal to contribute to solve environmental problems by clarifying “the interaction between humans and nature” and “the connectivity of hills, humans and oceans” respectively, it was inadequate to take approaches only from natural science, and necessary to incorporate elements of humanities and social sciences.

2. Studies on Humanity and Nature and the CoHHO

Well, then, what are possible “prescriptions” for solutions to the environmental problems? I would say that they should be the ones to “overhaul the human culture” or to “reconnect the disruption of the connectivity”.

It sounds simple if they just need to be fixed. However, if those problems of “culture” and “disruption” are rooted in the existence of human beings, then, it seems to be such a difficult challenge for me to even think of.

To write the prescriptions academically, I think it is important to understand environmental changes from the perspective of natural science as well as to grasp human behavior in terms of humanities and natural sciences. Though both the RIHN and the FSERC started mainly with researchers specializing in natural science, participation of researchers from the field of humanities and natural sciences in their projects has been desired for a long time. “Combination of Art and Science”, in a common phrase, must be required. Some people might say that there is no boundary between “art” and “science” and they are combined from the beginning, but I think that due to segmentation of academic fields, not just art and science, but even the links among the disciplines in art and those in science have been disrupted respectively. To write prescriptions to solve problems in hills, humans and oceans, I still believe that it would be indispensable to combine art and science.

However, it is easier said than done. How many years has been passed since necessity of the combination of art and science was first acknowledged to solve the environmental problems? Well, if you count it from the time when pollution problems were highlighted in Japan, it’s been almost half a century, and it seems to me that art and science have still not been combined at all. Indeed, it must be difficult. It would never occur spontaneously just by keeping researchers from science and those from art in a small room, and giving them time and money.

Personally, I think it would be extremely difficult for researchers from different disciplines to interact each other and work together. It would be very inefficient to achieve sufficient research results. That is why such research plans have never been proposed. However, if some researchers having the idea of “self-combination” gather and work together, then, combination of art and science may be accomplished, leading to solutions to the environmental problems. It would, nevertheless, be an extremely challenging process. I know how difficult it is through my experiences in “Environmental Valuation Project” by the RIHN and “Kibunka Project” by the FSERC, and also as a researcher being involved in “Link Again Program (LAP)” right now.

4. Framework of the CoHHO – Interaction Cycle of Humans and Nature –

I have been studying field science based on biogeochemical material cycle. In terms of natural science, you would relatively easily understand that each ecosystem of forests, rivers, “Sato” and oceans is closely connected to each other. In terms of humanities and social sciences, which is not a field of my expertise, we, as human beings, benefit from nature to live our lives, and thus, feel connectivity with forests, rivers, “Sato” and oceans physically, spiritually and culturally. In the activities of Long Term Ecological Research (LTER) Network, Scott L. Collins proposed a mechanistic approach to socio-ecological research, which is integrated science for society and environment (2007). Using his conceptual framework as reference, “Interaction Cycle of Humans and Nature” in both natural science and humanities and social sciences is shown in Figure 1.

The interaction cycle of humans and nature in this figure is described as follows:

5. Fundamental Issue in the CoHHO

【Glossary】
* Ecosystem services: Benefits that living organisms including people obtain from other organisms and ecosystems
– Provisioning services: Production and provision of food, water, etc.
– Regulating services: Control and regulation of climate, etc.
– Cultural services: Spiritual and cultural benefits such as recreation
– Supporting services: Services that allow for the other ecosystem services to be present, such as nutrient cycling and oxygen production by photosynthesis

【series of CoHHO study】Introduction to the Connectivity of Hills, Humans and Oceans : Figure out how they interact each other