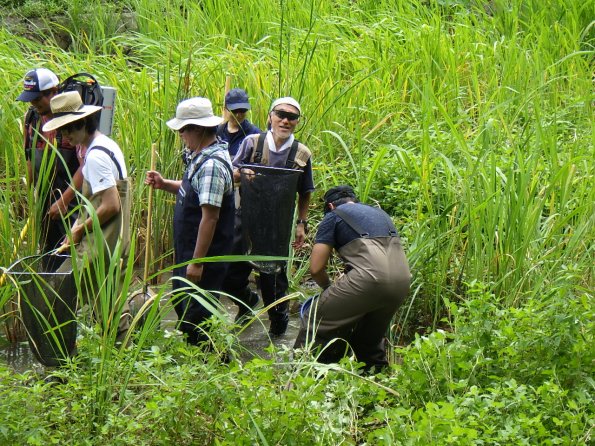 The Field Science Education and Research Center (FSERC) was founded in April 2003 by integrating nine facilities of Kyoto University: Three Forests Research Stations, three Experimental Stations, the Subtropical Plant Institute, the Maizuru Fisheries Research Station, and the Seto Marine Biological Laboratory. The CoHHO is the mainstay of education, research, and collaboration with society in this newly established organization and it is a principal field of the FSERC. Since its foundation, the FSERC has been devoted to create the new academic field, the CoHHO. These days, social activities which focus on the interactions between forests, rivers, fields, and oceans are widely conducted, and it is getting more and more important to convey the idea of the CoHHO to the public in a way which they can grasp more easily. The FSERC has so far published three books which explain the concept of the CoHHO in detail but has not been successful in conveying what it is in an understandable way. It is because researchers at the FSERC have not shared it as a whole while they fully understand it individually.

Therefore, the FSERC has planned to publish a new series of articles, “Introduction to the Connectivity of Hills, Humans and Oceans (CoHHO)”. In this series, first, three researchers at the FSERC, Prof. Yoh Yamashita, Prof. Takahito Yoshioka, and Prof. Naoko Tokuchi, who have been involved in the education and research of the CoHHO for many years, will present their own understanding on the CoHHO. Then, based on that, they will exchange their opinions and summarize what the CoHHO is at the end. We hope this series will help people to understand what the CoHHO is.

1. Idea of the CoHHO
One of the causes of the problems that modern society faces is that until the 20th century, scientists only worked for optimization (individual optimization) within their own narrow fields (systems and societies). They made their utmost efforts in order to solve problems. However, they only focused on enhancing efficiency and productivity in a short period of time, and for the optimization, they just ignored emerging issues and inconsistencies which arose in the process or put them aside outside their own fields. As a result, unexpected strains were caused to the surrounding systems and societies. Global environmental problems such as pollution and global warming are regarded as a consequence of the accumulation of the issues and inconsistencies ignored for the individual optimization.

In the 21st century, we have to build a harmonious and sustainable global society. For that purpose, the philosophy of “overall optimization” is indispensable. In this context, the “overall optimization” is to maximize “entire lasting happiness and benefit”, learning from the results of the “individual optimization”. To realize it, we should focus not only on productivity, efficiency, and economic profits, but also on sustainability, coexistence, and diversity with a long-term perspective, and must pay the cost to preserve the natural environment. The CoHHO is an academic field which tries to develop new relations between human society and nature from forests through oceans, aiming to build a harmonious and sustainable society.

2. Beginning of the CoHHO
Prof. Masaru Tanaka, the first director of the FSERC who advocated the ideas of the CoHHO, introduced some of its ideas in his books as follows:

“It is a study which not only restores the connectivity between forests, rivers, and oceans, but recovers the significance of the connectivity among nature, between nature and people, and among people.”

“It is a new integrated academic field which approaches to the world of “Mori wa Umi no Koibito (The forest is longing for the sea, the sea is longing for the forest.)” scientifically, and its goal can only be achieved in collaboration with social activities.”

As seen in such ideas, the CoHHO is composed of both aspects of natural science and social science: In terms of natural science, the CoHHO aims to restore a rich natural environment by clarifying the mechanism of the linkage between forests, rivers, fields, and oceans and fixing its fragmentation. Meanwhile, from the perspective of social science, the CoHHO intends to study people’s sense of values, environmental awareness, and social systems in order to associate the restored natural environment with human happiness. From a viewpoint of watersheds, for example, all the nature and human activities in the watersheds should be the subject of research. In other words, the CoHHO is an interdisciplinary and integrated academic field which deals with complicated systems in an extremely wide range of fields. In the field of natural science, each research on oceans or forests could be regarded as part of the study of connectivity itself, but in the CoHHO, it is necessary for researchers to study not only the ecosystems which they are specialized in, but also the interactive relationships with their neighboring systems.

3. The CoHHO from the Viewpoint of Ocean Science
My role as a scientist is to scientifically elucidate the connectivity of hills, humans and oceans from the viewpoint of ocean science. That is, I aim to scientifically analyze the world of “Mori wa Umi no Koibito (The forest is longing for the sea, the sea is longing for the forest.)” initiated by Mr. Shigeatsu Hatakeyama in Kesennuma, Miyagi Prefecture.

Here is my assumption: “In Japan, the coastal fishery catch has been decreasing since 1980s. There have been huge outbreaks of jellyfish and lean sea urchins, and biodiversity has been on the decline. Is disruption of the connectivity of hills, humans and oceans one of the primary factors of such ecosystem degradation?”

To verify it, I have held symposia at academic meetings to review our findings, and I have also been conducting studies in the Yura River watershed in Kyoto Prefecture and the Kunisaki Peninsula in Oita Prefecture. The key points are 1. Water brought from watersheds to oceans, 2. nutritious substances, 3. organic substances, 4. inorganic particles, and 5. alteration of rivers and coastal environments by humans. I have been investigating the origins of these substances and their dynamics through to oceans and studying the relationship between environments and biological production systems in rivers and coastal areas.

Articles will be posted on the website of FSERC from the next issue. The main theme of the next issue is “Do rich nutrients from forests nurture productive coastal seas?”.

【series of CoHHO study】Introduction to the Connectivity of Hills, Humans and Oceans : Figure out how they interact with each other